In conjunction with Umatik Entertainment, Shunt Production is accepting pre-orders for the Recoil concert film ‘A Strange Hour In Budapest’, to be released on Blu-ray. This is a full HD production with DTS-HD 5.1 surround sound and stereo audio soundtrack, mixed by Alan Wilder and Paul Kendall.

Directed and edited by Attila Herkó, ‘A Strange Hour In Budapest’ will be delivered as a Blu-ray only format, presented in a deluxe DVD-sized 6 panel digi-pack with reinforced slipcase, containing a 170gm 16-page booklet packed with information and photo manipulations by Ákos Szénási. With the first 1000 copies individually hand-stamped/numbered, the disc will also feature extra promotional films and live projections.

The concert film will initially be available to pre-order via the Recoil Official Store, and later at other on-line and retail outlets via Alfa Matrix. All store on-line orders are dispatched with an exclusive code to receive downloadable extras such as a pdf art booklet with extra spreads, a soundtrack sampler, Recoil ‘live’ photographs and project wallpapers.

A website devoted to the release is now live at : http://bluray.recoil.co.uk  This site will continue to be updated with additional news about the project, including more complete details of extra downloads, an exclusive Recoil USB stick with additional content, Blu-ray player recommendations and other technical information, so please keep checking in there.

Note : It has been decided to limit the main format to Blu-ray because the film works infinitely better at its highest resolution and Alan does not want to compromise this aspect. Secondly, Blu-ray players are cheap and simple to install these days. If you haven’t upgraded yet, now is the time to do so! 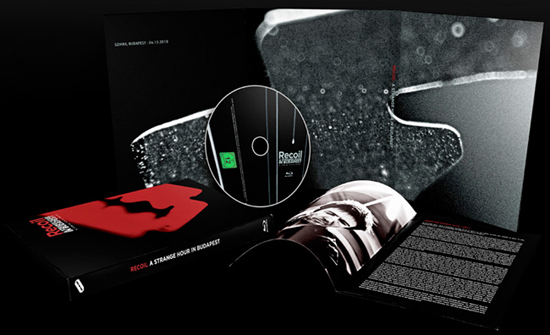 ‘A Strange Hour’ was presented during 2010 and 2011 in 52 cities across the world as part of the ‘Selected Events’ tour to celebrate 25 years of the Recoil project.

Says Alan : “The idea to take Recoil out on the road evolved during the release of ‘Selected’ in 2010. The events were not so much ‘live’ band but more art installation featuring stripped down, edited sections from many Recoil remixes and alternative versions. For the presentations, I managed to gather together filmmakers from as far as Russia, via the Czech Republic and Hungary, all the way to Argentina.

One of the most memorable moments of the entire tour came about, strangely enough, through adversity. Who can forget ‘Eyjafjallajökull’ and the major headaches and logistical nightmares it caused? Back in April 2010, the Icelandic mountain awoke, spewing its contents into the stratosphere and reaping havoc on the very same day Recoil was due to fly from London to Budapest. After an eternal struggle via airports, train stations, traffic jams, manic phone calls and confusion all round, 12 hours after leaving home my team and I found ourselves back on my own doorstep having got precisely zero kilometers towards the Hungarian capital. The last resort and only option was to drive (in my own car) through the channel tunnel and no less than 7 countries from West Sussex to Diesel club, Budapest – a journey of some 21 hours non stop. Word got around (while others were canceling shows left, right and centre) that, against all the odds, we were on our way – and when we arrived with about 1 hour to spare, what greeted us was one of the most vociferous and appreciative crowds on the whole tour.

To cut a long story short, we wanted to come back, not least to finally see a little of this beautiful city, but most of all to play once again to the warm Hungarian public. The second Budapest presentation and last of 2010 was held in the beautiful newly-renovated Szikra venue. To celebrate this end of year special show we decided to install an extra large fully professional cinema screen and projector. The screen measured a giant 8 x 5 meters and covered the entire stage area.

The performance was filmed using the latest high-definition technology in order to capture the event in its full glory. For this (with the help of the local promoters), the team from Umatik was recruited, headed up by director Attila (‘Atus’) Herkó, and in a similar way to the stage projections, we worked remotely on the editing – I gave feedback to rough edits which Atus sent to me whilst Paul Kendall and I simultaneously worked on the surround sound mix, and everything was refined from there. I think you will agree Attila’s film is stunning and offers a captivating and exhilarating document of ‘A Strange Hour’.

‘A STRANGE HOUR IN BUDAPEST’