For this Recoil report, it’s probably appropriate to summarize Alan’s activities immediately after the completion of ‘Unsound Methods’.

The summer of 1997 was spent ‘turning the album around’ – or in other words, undertaking everything from artwork production, marketing, press and promotion through to manufacture and eventually, distribution. Although the hard work of actually writing the album is complete, this period of decision-making can be particularly active for any artist. Alan spent much of his time moving between the different departments of Mute Records in London discussing ideas, listening to suggestions and approving or in some cases rejecting them! He also liased directly with Intro, the company responsible for Recoil’s unique and acclaimed artwork. (Design Week magazine featured it in their August 1997 issue.)

The promo for the first single ‘Drifting’ was directed by John Clayton for Swivel Films. In keeping with the desolate atmosphere of the track, it was filmed in a derelict Victorian hospital in Woolwich, London. Alan was again involved in the whole process right down to the final editing itself. This was also the case in the production of a Recoil E.P.K. (Electronic Press Kit) – a promotional interview video. One part of this was filmed during a gruelling photo shoot with two of the collaborators on ‘Unsound Methods’, Douglas McCarthy and Siobhan Lynch, on what must have been the hottest day of the summer. VH1’s Pip Dann interviewed both Doug and Siobhan at this time and later joined a production team at Alan’s house and studio to interview Alan himself.

Alan also returned to the studio to program and produce his own remix of ‘Drifting’ (Poison Dub) as well as commissioning guest remixes – in this case a version of ‘Control Freak’ by Barry Adamson and Panasonic’s interpretation of ‘Shunt’. In November, he returned again to the studio with P.K. to produce two new remixes of ‘Stalker’ and ‘Missing Piece’. 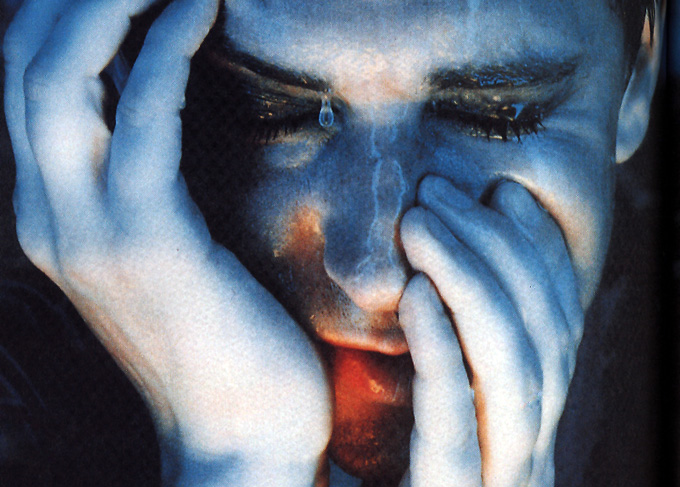 Add to all this activity photo shoots with Per Heimly and Steve Gullick, press releases, a Recoil database booklet and a whole host of other bits and pieces and you have an idea of the hard work that goes into the making of an album – especially if you’re a perfectionist like Alan who wants to be involved at every step. You can understand why he finds it amusing when every time his father-in-law comes to visit he asks “Have you made a record this week?”!

A few weeks before the release of ‘Drifting’, on October 13th, Alan undertook a European Promotional trip, taking in 6 countries: Sweden, Denmark, Belgium, Germany, Austria and France and covering 7 different cities. His first port of call was Stockholm where he did interviews for national and college radio, Swedish MTV, national daily papers, magazines and the major electro-fanzines. Copenhagen saw him involved in a live internet chat for New Music United and a similar array of interviews.

In Belgium he did a live interview for Radio 21 amongst the normal selection of press. Hamburg was particularly hectic with non-stop magazine and fanzine interviews, photo shoots and TV interviews all day. This was made much easier thanks to the beautiful weather and the fact that everything could be done on the terrace outside the front of the hotel – an added bonus that seemed to please the small army of fans who kept arriving all day to talk to Alan and ask for autographs.

Next stop was Munich and after a full day of press, Alan enjoyed 2 days just relaxing and even took time to wander around the city’s biggest flea market where he managed to pick up one or two interesting bits of medical paraphernalia for his collection back home. He then travelled on to Vienna and finally to Paris where his schedule included a filmed interview for Club Internet.

Back in England, the press has continued throughout this period. For example, Alan was a special guest on the ‘Sean Hughes Show’ on Greater London Radio, he did major interviews for ‘Future Music’ (issue 62 October special) and ‘Sound On Sound’ (January 1998 issue). His musical expertise was also required by ‘Time Out’ magazine to review the singles in their Nov 5-12 1997 issue. Together with many regional articles and interviews, reviews of the album appeared in all the major music publications. Add to this, several days of ‘phoners with territories such as Australia, Japan, S.E. Asia and further afield in Europe, and you have the most extensive period of promotion ever done for Recoil.

In the USA, where the whole process of marketing and promotion is different to Europe, the album was released by Reprise a month after Europe. Although Alan has done some press for this territory (including a live ‘phone chat for ‘Sonicnet’), more is scheduled to follow in the coming months.

After a characteristically excessive Xmas and New Year, the start of January 1998 saw Alan return, somewhat reluctantly, to his studio, The Thin Line, to start work on what will hopefully become a new Recoil LP. I say reluctantly because although the studio has central heating, it basically consists of a very large open-plan space and no matter how much heat you put into it, it never seems to get very warm! During the making of ‘Unsound Methods’, he spent most of the winter months huddled around an electric fire and wrapped in numerous jumpers, socks and blankets.

As Alan has said before, it is difficult to predict what direction the next Recoil album will take and it can take days or even weeks for a spark of an idea to turn into something that can be developed. However long it takes, we all hope that the experience of making it will be an altogether warmer one.