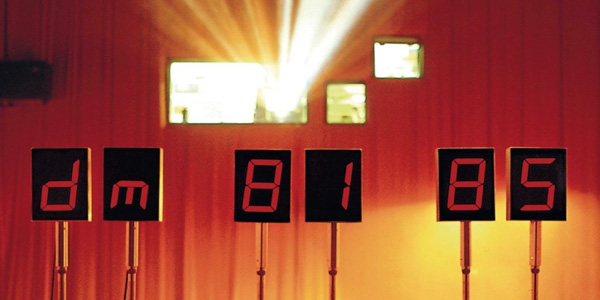 Also, I don’t know if anyone’s previously asked you but how did you feel at the time about all those mixed single reviews that were included on the sleeve for the ‘Singles 81-85’? I must say I think it was a masterstroke putting them there; I particularly enjoyed the comment about ‘Master And Servant’ sounding like ‘Snoopy versus the Red Baron’.

I suppose it was a pretty confident thing to do at the time. A good point was made though – by placing a good and bad review of each single on the cover notes, it became obvious how little notice one should take of one’s own press.

I was watching ‘The Videos 86 > 98’ tonight and I noticed something that bothered me, and will probably annoy the hell out of you. Before the song ‘Everything Counts (Live)’, during the little CG intro, they misspelled ‘Everything’? – they forgot the ‘y’. Just wondering if you noticed?

Can’t say my eagle eye had spotted that one, you trainspotter 😉 Now stop studying the small print and ask Mute why they included a live version of ‘Condemnation’ ………… because I don’t know.

I love the re-mastering of ‘The Singles’. It has really helped some songs (‘Everything Counts’, ‘Stripped’). Does this mean that we can look forward to a re-mastering of the Depeche Mode catalogue (with bonus cuts)?

No plans at the moment for any further re-releases but I can tell you that all the old master tapes are disintegrating. Storing musical data is a real problem actually because the oxide falls off the tape. In order to restore old multitrack recordings, it is necessary to bake the tapes in an oven, after which you only have 2 or 3 plays to transfer the results to an alternative format before they vanish altogether. When Steve (Lyon) and I were re-working songs for the ‘Devotional’ tour we discovered that some of the older Mode tapes were already toast.

I am very disappointed about the new release of the ‘Singles 81-85’. I believe that the only reason for this disappointing CD is that DM want to earn a lot of money. The only unreleased song is ‘Photographic’ and most of the fans know this version. OK it’s re-mastered but it’s too expensive.

You’re not obliged to buy it if you already have it. You’re also entitled to your opinion but don’t you think it’s better to make it available for those who didn’t get it the first time around or are curious about the earlier singles? It also has much better artwork.

I’m not sure who suggested including these – maybe Dan Miller? I think it was partly to fill up spare time on the CD and also to make those particular tracks more widely available. I don’t think either had been out on CD before.

Regarding your involvement in the DM ’86>98′ release. When you were consulted, did you speak to the record company or did you at some point have contact with the other members of DM?

I haven’t talked directly with any other members, just record company and management etc.

What do you think of Intro’s art for ‘Singles 86>98’ as opposed to their work for ‘Unsound Methods’? Since I’m not asking you to critique DM per se, give us yer answer, c’mon! :->

I thought it was of a generally high standard which I would have expected but as I’ve said before, they were never going to have the same feel as Anton’s work, which for this historical release would have been much more appropriate. I’m not saying that his artwork would have been better but the continuity would have been there. Intro’s ‘token’ rendition of some of the previous symbols (like the rose for example) looked a little ridiculous but some of the main photos look great. I actually prefer the main (red) image as used in the forthcoming re-packaging of ‘Singles 81>85’.

What input did the band have on the 1, 2, 3 box sets and why were some tracks missing?

I had quite a lot of input on the content. It wasn’t supposed to be a complete set – just favourite / best-of tracks at the time.

I noticed you had input into the ‘Singles 86-98’ but apart from ‘A Short Story’ what else was your involvement?

Well, contractually, I have rights to be fully consulted about all aspects of recordings I was involved in, like which versions are used, artwork, label copy, promo items, marketing ideas etc. Sometimes it is a struggle though for a leaving member to be heard (out of sight, out of mind) and often it is assumed that because I left I either don’t care or have given up all these rights. Not so.

I’ve just purchased ‘Singles 86-98’ and I wonder why the Shep Pettibone mix of ‘Behind The Wheel’ is on this CD? This mix is terrible! I understand that it is the 7″ remix but there must have been some discussion about what tracks should or shouldn’t make it, or do you just blindly put everything out? You said that you had been outvoted on ‘In Your Room’ (Butch Vig mix) but I think the album version of ‘Behind The Wheel’ or the edited Beatmasters mix would have been a much better choice. Surely, both you and us (fans) want the best to be on the CD?

The compilation is really a historical piece which, in my opinion, correctly remains faithful to all the original 7″ releases (as did ‘Singles 81-85’). I personally feel this is the right way to go even though I do agree that this isn’t necessarily the best version of ‘Behind The Wheel’. The same also applies to a number of other tracks on the record, however, everybody has different opinions about their favourite versions and it would have been absolutely impossible for us all to agree. As you point out, I was outvoted on ‘In Your Room’ at the time of it’s original release but since that was the decision, for this release, the correct version has been chosen.

Oooh, they are in demand aren’t they? Perhaps I’ll include one as a prize in a future competition…….

From which tour was ‘Everything Counts’ Live recorded?

It was recorded during the ‘Music For The Masses’ tour and released as a single to promote the ‘101’ film. Pennebaker directed the video.

In the French magazine Keyboards N°124, there is an interview with you and your former colleagues. Were you all together in the same room or was it two interviews made separately and merged into one?

This was taken from the interview CD that’s included in the press pack for ‘Singles 86 – 98’. It was done separately from the other band members.

Does it make you feel proud to see an album out with so many classic tracks that was a major part of your life?

Yes – it represents a lot of work and throws up some good memories as well.

You’ve mentioned frequently that you still receive royalties from any Mode projects that you’ve been involved with. Do you have any idea if Vince still gets the odd royalty cheque for ‘Speak & Spell’ and ‘The Singles ’81-’85’ / ‘Catching Up’?

Exactly the same principle applies to him.

Although I don’t know the correct running time of ‘Singles 86-98’, from the track listing it seems that there’s plenty of space left on both of the discs. Did you ever consider filling the empty space with the gems of your early years and thus making this the ultimate DM collection so far?

It’s a question of continuity. Remember, there has already been ‘The Singles 81-85. It wouldn’t really be a singles collection if we had included all sorts of other things. In fact, there was some debate about the inclusion of ‘Everything Counts’ and ‘Little 15’ . I’ve never been a big fan extra tracks on album CD’s purely on the basis of filling up the space.

What is your least favourite track on ‘Singles 86-98’ (from the times when you still were in DM) and why?

Probably ‘Strangelove’. I don’t like the ‘Behind The Wheel’ remix much either.

In ‘The Singles 81-85’ booklet there are two review quotes for each song on the album and almost all of them are negative. Whose idea was it to use them and were they put there just to make fun of the critics who wrote them?

The idea behind the quotes (which are actually about 50% good and 50% bad) was to show that a) we didn’t take ourselves too seriously and b) how unreliable journalists are with their comments.

You said that the singles are being “re-mastered” for the upcoming ‘Best of….’. What exactly does “re-mastering” involve and what difference will it make to the sound?

It means finding the original stereo masters, in whatever format they were recorded at the time and re-cutting them at a mastering studio using the latest technology, incorporating compression and EQ to match the respective sounds of all the tracks so that they are as good and loud as they can possibly be, creating an overall continuity to the L.P.

Do you have any say in further DM releases? I don’t mean future stuff but past material, for example the Singles 86-98, or any re-released rarities.

Just as I receive royalties from any recordings I was involved in, I have certain rights regarding their release. For example, I have to be reasonably consulted regarding issues of marketing and artwork etc. – most importantly, I am entitled to fair representation.

You mentioned something about currently listening to the ‘Singles’ collection. Now I’m intrigued! Did the band send you a complimentary copy of what it’s going to be like or has it been officially released?! What’s going on here and if it is the same singles collection that I’m thinking of, what do you think of the new tracks?!

I must say I’m rather surprised by your obvious bewilderment that I should have a copy of the forthcoming ‘Singles ’86 -’98’ release. Wouldn’t you have thought I’d be involved in a release that features 75% of recordings that I worked on? This record represents 10 years of hard work for me and I am consulted on all aspects of it’s release.

I know you might not be in a position to answer this question but this ‘Singles’ tour seems more like Depeche Mode’s ‘Farewell’ tour. What’s your opinion on this?

Who knows? – I certainly don’t.